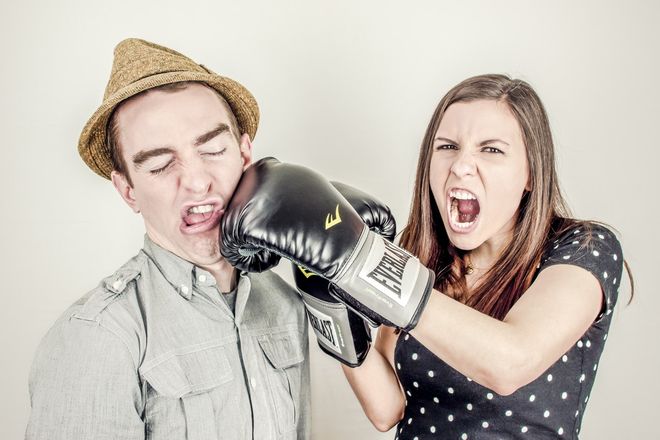 And Then the Fight Started...

I sat at the front desk when a couple, Robert and Shelley, came in for their appointment. They were sitting without saying a word, yet the silence was loud. I was trying to be friendly and chatty when I accidently stirred things up. It reminded me of those old jokes that end with the line, “and then the fight started...”

My wife was hinting about what she wanted for our upcoming anniversary. She said, 'I want something shiny that goes from 0 to 150 In about 3 seconds.' So, I bought her a scale. And then the fight started...

When I asked what was going on, Robert didn’t hear what I was saying. He knew I was speaking but could not comprehend what I said. And then the fight started... Shelley shared that they had a meeting the day before with their insurance agent. The young woman was sitting across the desk from them and even when she was looking at Robert he didn’t understand what she was saying. Even in the car with Shelley right next him, he still couldn’t understand. He was not hearing in a restaurant or anywhere with noise.

I pulled up his file and Robert has a profound loss, almost as bad as Blair’s mother, MaryEllen. When someone has this significant of a loss it takes a lot of technology to lift sounds so they can even hear the sounds. And if we can lift the volume high enough, the ability to process words comes into play. Robert’s discrimination was 68%, which means he can process only two out of three words. In a sentence of 10 words he only understands six. So Robert will have to fill-in or guess at the other words and without knowing which words he understand the meaning can shift easily.

Having lived in Blair’s family I understood the pain, fear and frustrations that come from living with someone with a hearing loss. I know that emotional pain of not being understood by MaryEllen. She wasn’t trying to confuse my words, she just had to guess at so many. Back then I didn’t realize how hard she was working to try and understand I only knew how hurt and frustrated I was.

MaryEllen passed away in 2008 and at the time she wore the best hearing aids available, but they aren’t anything like the amazing technology available now.

Just the amount of volume available far surpasses what was once considered a power aid. This new level of power comes with minimal to no feedback issues, which means less requirements for earmolds to hold the sounds in the ear. They also have amazing background sound reduction and speech enhancers that can be personalized for each situation in the moment using a smart phone app.

Back when MaryEllen and I would spend time together, we wouldn’t consider trying to hold a conversation in the kitchen while cooking. Yet with the current technology’s power, sound reduction and speech enhancers we might be able to at least talk to each other while in the kitchen.

If you or someone you care about is not hearing well and this is straining your relationship call for an opportunity to try the new technology. We understand the strain and emotional pain that comes when living with someone who can’t easily hear what you are trying to say.